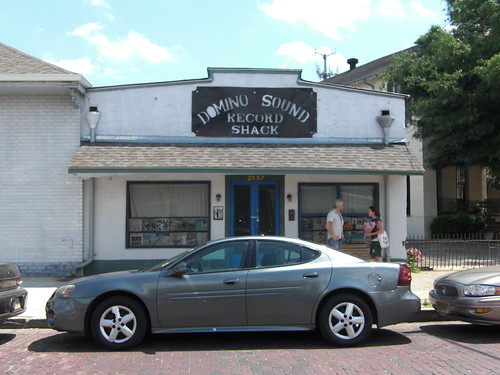 4) How long have you been a record store owner?

5) How did you become interested in owning a record shop?

I couldn’t find the records I wanted to maybe find at any of the places that were open in New Orleans, reggae 45s, African albums, etc. I was looking for a spot before Katrina came and knocked this town for a serious loop. After some months of working to get some things back up and running with life, the idea of a new record store in a town devastated by disaster somehow seemed like a good idea. 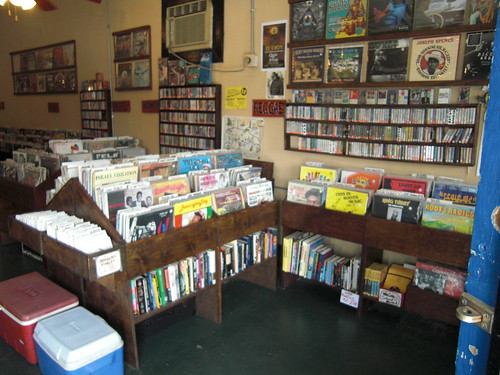 6) From where does your passion in music come?

I think some people are born with music as an integral part of staying happy in life, others not. Don’t know why some people can go either way, some don’t care at all, and some need music to fill voids, find perspective, or to keep their own party of the time bouncing and moving. I, personally, need it as a part of daily life, am enamored by the things that speak to me, and so thankful to the musicians and producers that have made it available to me by working at it. I was very fortunate to be the last of seven children with a few music lovers older than me that were very interested in using this last child as some sort of malleable experiment. they demanded that i love baseball, with the caveat that i was a Giants fan and a Dodger hater. It worked. they also were eager to play music for me and had excellent taste. top 40 radio was forbidden, and i was a fan of Devo, the Clash, Buddy Holly, Chuck Berry, Bo Diddley, etc. around age 7. A bit later was my introduction to punk rock with hand me down cassettes and I ran with that. So, I suppose I was born with the bug that music would be an important part of my life, and nurtured in directions I am thankful for my brothers, Tim & Will.

A bit long winded I have found out as time passes by, isn’t it? It is mostly an ode to the jamaican sound systems and record business from the past. I used to deejay about town quite a bit and also had a huge love for the game of dominoes (especially while listening to old reggae music). The deejaying gathered names, “prince pauper” as me, and then “domino sound” as the umbrella that was any event that I put on and threw my support behind. There were ridiculous brain storm sessions with friends before the shop got it’s name, but it made perfect sense from the beginning to use “domino sound” and add on what was sold inside-records. The shack is an ode to the old jamaican record shops. The shop is not actually a shack, but i’ve been by Prince Buster’s old shop on Orange Street in Jamaica, and it isn’t a shack either.

Yes, although I have a computer tucked under the counter to stay in step a wee bit with the modern times. On the floor, available to the people, it is all analog.

9) Are you seeing resurgence in vinyl and turntables?

Yes. Every few months I will get an article from a newspaper in the mail or a link to some article about the resurgence of vinyl from a friend or family with a “was thinking of you” note attached. They are almost always the same thing regurgitated, and have been written since I opened, so the “resurgence” has always been there since the shop opened it’s doors. I have seen it here as time passes, too. More customers, more people asking about how to go about getting a turntable and hook up a stereo, and generally a rise in business as each year passes. It really is here to stay and it makes sense to me. Digital files over a computer sound puny and soulless to me, whereas a record is the best thing next to seeing the band live. The always befuddling music industry tried to kill vinyl and failed. The compact disc was a con to sell the back catalog of the Beatles, Fleetwood Mac, & Michael Jackson all over again. The prices they are setting for newly pressed records seem like they are trying to kill it again, but I am hopeful that enough folks with small labels and a true love for the music and the medium continue to put out records to keep the racks in here affordable and interesting.

10) You have travelled to Ethiopia to record music? Tell us a bit about that.

I have been to Ethiopia three times in the past five or so years. I did go one time with microphones and a mobile cassette field recorder and such, but never actually used it. I guess i’m not so good at feeling comfortable being a field recorder as a foreigner. So I haven’t recorded music in Ethiopia, but have been enamored enough by certain recordings to orchestrate with my partner over there, Mitmitta, to re-release collections of music. We have released an lp of Amharic wedding songs from 1973 made with traditional and western instruments, and an lp of songs recorded in 1976 by the Oromo singer Ali Birra. Next up is an lp of singles released by the Eritrean guitarist pioneer, Tewolde Redda.

11) Are there other places you have traveled to record music?

No, not to record music. The only field recording I have ever done is on the streets of New Orleans. It is of a 6o-something pick up brass band named the Krewe of Eris that plays one time a year, during the Eris parade.

12) What is your opinion on Jambalaya? Do you have a favorite Louisiana dish?

Jambalaya is good. I’m a rice lover, so no problem there. My favorite Louisiana dish is likely a shrimp po-boy from the Orange store on Rampart Street, but only once or twice a year. Louisiana food is mostly quite heavy, that aforementioned po-boy included.

By Brooks of Sheffield

13) Domino Sound is both a record label and a record shop? How did this come about?

After the shop was up and running I guess that I wanted to do a bit more along music and record lines. The records I have put out are things that I wished I’d had sitting on the racks. Since they weren’t there, I got ’em there. The list of to-do’s is longer than I will ever actually get to. I move pretty slow in the record making world. Oh, so many hard to find gems I would put out if it wasn’t so complicated and time consuming.

14) What are some of your favorite music genres?

Certainly reggae. That seems like it is number one to stay, but I am a big lover of Colombian cumbia, tons of African music, old son from Cuba, sad soul from the first half of the 60’s and lately, the most played things seem to be rhythm & blues on 45 with their big sound and sparse length. I like good music (to me), and am certainly partial to things that don’t have giant and tidy production qualities.

15) What is your all-time favorite piece of music? Does this even exist?

Do movies and records go together? I know a lot of people who are wild about both of them. I like movies, but am no movie buff. I think my standard answer on this one for quite a while has been “the Manchurian Candidate” with Frank Sinatra, Laurence Harvey, & Angela Lansbury. Director wise…Hmm.

17) Stereo Freeze by Jackie Mittoo. Rocco likes it. Do you like it?

Sure! That’s a real swinger. I’m a huge fan of Studio One anything. With Mr. Mittoo, I think my favorite is Evening Time.

18) What do you like most about being a record producer/store owner?

Meeting people I wouldn’t otherwise and often they are buying up stacks of records that I love top to bottom.

It’s at 2557 Bayou Road in New Orleans’ 7th Ward, about five or six blocks from the entrance to the fairgrounds where they race horses and have jazz fest. Hours are noon-6pm, except for on tuesdays when the shop fully rests.

20)You had a Japanese tv program starring a cat in your shop. What was the story on that?

I have always turned down media asking to pry in here, but was contacted by a cat/travel show from Japan to film some of their “New Orleans” edition here. Too weird to say no to, so I said yes. A one hour program of maybe a dozen cats just “being” in New Orleans. The cat that I found out the day they filmed has at least seven names, and spends some of his days in the shop, leads off the show. I wish I knew the name of the show, but I don’t. They sent me a dvd and the more I watched it, the more I was convinced that the show is genius. Very calming and the cats are just beautiful. Now i’ve got wonderful footage of the cat for as long as the dvd lasts.